When the conscious mind first hears tinnitus, it cannot correlate the sound with anything that it has heard, so our survival instincts means the brain will classify it as possibly threatening and will place the body and mind in a state of high alert for possible ‘fight or flight’.

If a person’s initial reaction to the sound of their tinnitus is negative i.e. they are worried and fearful of the sound, a vicious cycle as shown below is established. This cycle can only be broken by addressing and overcoming one’s fears.

Tinnitus is just a noise, it cannot harm you in any way. It is the emotional reactions that cause the inability to cope. When you stop having negative emotional reactions to the tinnitus, it does begin to diminish. The way you think about your tinnitus determines your emotional and physical reaction. If you continually view your tinnitus in a negative light you will be locked into the vicious cycle of fear, anxiety and depression, as per ‘The Vicious Cycle’ described below. 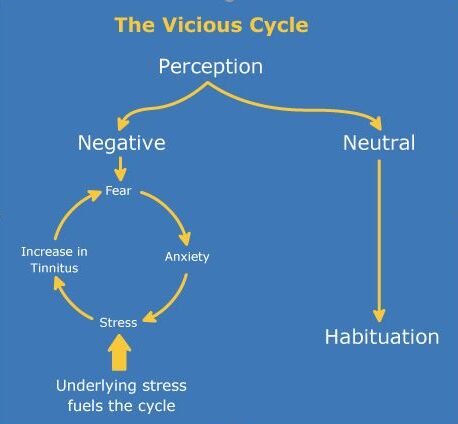 The way you think about a situation determines your emotional and physical reaction.

The following story from Dr Lawrence McKenna, a UK psychologist, illustrates the point.

Pretend that you don’t have tinnitus, and you’re in a subway in New York jammed in like sardines, and some idiot comes up behind you, and starts jabbing you in the back with an umbrella. What happens?

Well, if you’re normal, you get upset, and you get mad. Your face gets red, your blood pressure goes up, and your pulse goes up. Those are physical changes in you based on the thought of the jerk who’s stabbing you in the back with an umbrella. You turn around to tell him to stop, and you discover that it’s not an umbrella, it’s a gun. What happens?

Your face goes pale, your palms get moist, your mouth gets dry. Those are physical changes in you based upon your thoughts about the stimulus – the very same stimulus, a poke in the back. So you turn around to give the guy all your money and you discover that it is not a gun. It’s a blind lady with a cane trying to maintain her balance in this precarious situation. What happens?

The colour returns to your face, a shudder of compassion comes over you, maybe a tear comes to your eyes. You try to assist her to a safe place in the subway. Again a different set of physical findings based upon your thoughts about the stimulus. So what’s our stimulus? Our stimulus is our tinnitus. Changing the thoughts that we have about our tinnitus can not only impact on us philosophically, it can impact on us physically.

Another example of your thoughts determining your emotional reaction to a situation is to imagine that three people were retrenched from their jobs.

The first person thinks ‘I am a Failure’, their emotional reaction is one of despair, anger, frustration and depression.

The second person’s thoughts are neutral, they therefore have no emotional reaction.

The third person’s thoughts are positive, ‘I will take my payout and start that small business I have always wanted’, their emotional reaction is one of joy, hope, excitement and happiness.

Each person was faced with the same situation, but because each person perceived their situation in a different way, they had a different emotional reaction.

When you apply this philosophy to our situation of having tinnitus….

However if your perception is positive, ‘I will manage it and not let it affect my life’, your emotional reaction will be one of control, optimism and acceptance.

When a sound is threatening or unknown, the subconscious mind puts the brain and body into the ‘fight or flight’ survival mode.

The following story from a paper presented by Dr. Stephen Nagler at a tinnitus seminar illustrates why a negative perception of tinnitus causes so much anxiety:

There is a travelling salesman making several stops during a cold winter. He is chilly, tired, and hungry, but he has forgotten to make a motel reservation. He sees a motel by the side of the road. One level.

Park right outside your room. Vacancy light flashing. The manager says that there is one room left, but unfortunately the steam radiator has a small crack in it; there is a constant ‘hsssss’ sound as steam escapes.

The salesman is cold, tired and hungry, and takes the room gratefully. He enters the room, notices the quiet ‘hsssss’ sound and puts down his bags, eats a sandwich, brushes his teeth, takes a nice hot shower, puts on his pyjamas, pulls back the fresh linen on the bed, crawls in and falls asleep.

The next morning he awakes refreshed, and goes on his way. Six weeks later he finds himself in the same situation. Same town. Cold, tired, hungry. No reservation. He remembers the motel. The manager says, ‘I have one room left. It’s the same room you had six weeks ago, and I apologise: I have not yet had a chance to fix the steam radiator.’ The salesman says ‘No problem. I slept just great six weeks ago. I’ll take it’.

As he is walking down towards the room, the hotel manager yells to him, ‘Oh yes, one other thing. A couple of days ago a travelling circus came through our small town here, and two cobras escaped from the snake charmer. They caught one of them right there – about twenty yards up the street. And they expect to catch the other one any time now. Thought you’d like to know. Have a good night’s sleep’.

The salesman enters his room. He hears it. ‘Hsssss’ He looks carefully behind the curtain. Then he gets ready for that nice hot shower, but he slowly peeks into the shower before taking a quick shower. He then gets ready for bed. He looks under the bed first. He pulls down those fresh sheets rather cautiously before he slides in – somewhat tentatively.

Do you think he sleeps? Not a wink! He tosses and turns all night, cannot wait to leave at daybreak, even before. As he leaves the motel, the manager sees him. ‘Hi. Glad I caught you. I got a phone call around 2a.m. An eighteen wheeler ran over the second cobra about two miles up the road. Just thought you’d like to know.’

Six weeks ago, the ‘hsssss’ of the cracked steam radiator was a meaningless neutral background sound, which quickly ‘faded away’ and afforded the salesman a pleasant restful sleep. Now, the exact same sound – same frequency, same intensity, same character – was the most intrusive, most annoying sound imaginable – only because it had taken on a new meaning. But was it really louder?

It certainly seemed so to the salesman – even though the readings on a decibel metre placed in the room would have been identical. And since people who are afflicted with (subjective) tinnitus are the only people who can hear their tinnitus… perceived loudness is the only loudness that counts.

Perceived loudness is a function of two variables: the magnitude of the signal and the meaning assigned to that signal.