The more a person focuses on their tinnitus, the louder it will seem, and the more distressed they will become. You must learn to shift your focus to other thoughts and activities so that gradually the periods where the brain is not focused on the sounds become more frequent and prolonged.

The brain cannot attend to two tasks at the same time and give full attention to both. As an example, when talking on the phone whilst watching TV – your brain will give priority to one or the other, but not both at the same time. In the same way, the brain cannot focus on tinnitus if tinnitus is not given priority. Take advantage of your brain’s limitations – focus on something else.

In the early stages, shifting your focus is not always easy. It takes practice and perseverance.

When you become aware that you have not been listening to your tinnitus for a period, the brain has not been giving priority to the tinnitus.

These periods of not focusing on your tinnitus become longer and more frequent as you become more relaxed about your tinnitus.

Keep your brain active and avoid silence where possible by exposing yourself to low level background sounds such as a CD or radio playing softly in the background.

When your tinnitus is troublesome, remain active. Go for that walk, or better still, socialise with others. Avoid the temptation to hibernate in front of the TV.

The more you pay attention to your tinnitus, the more sensitive your brain will become to the unwanted intrusion and the more distressing your tinnitus will become. In the early stages it is very easy to get into bad habits that will prevent you from reaching habituation. Some of the Do’s and Don’ts of managing your tinnitus are: 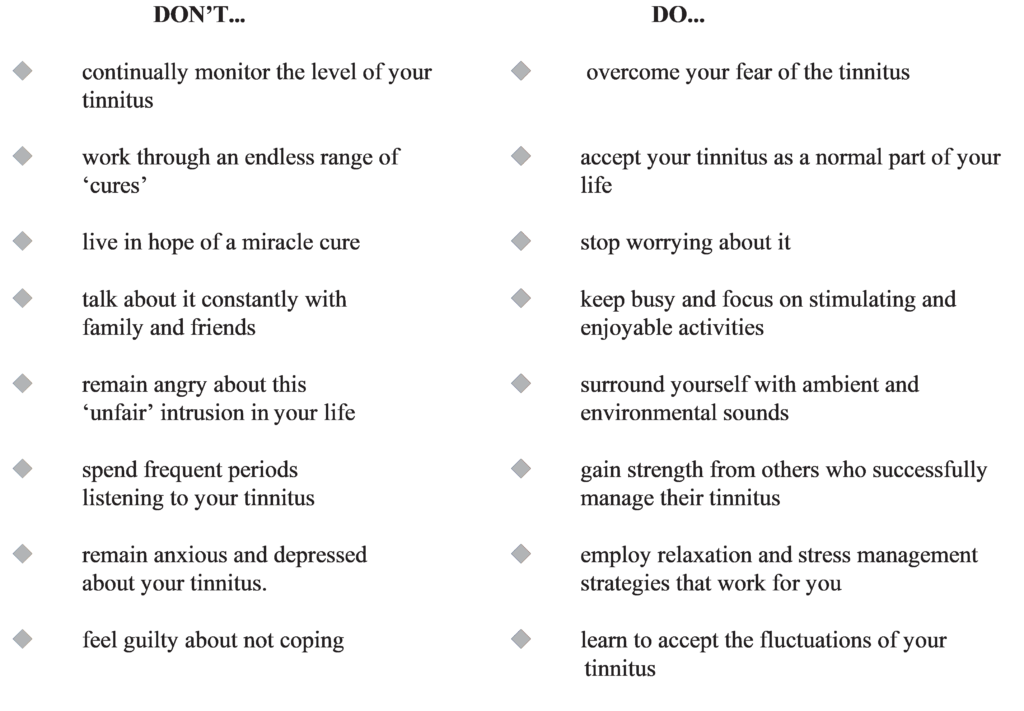 Do not let your tinnitus manage you, you must manage it!

It is more difficult to focus away from your tinnitus